With FSL 6 in progress, we thought it would be interesting to interview the previous FSL Champions, Artemis, to see what the members are up to today. The team is no longer playing together – Hishiko, Hanabira and Bubbles left the team whereas jiaa and kimchi are now playing for Asterisk*.

We interviewed the following players: 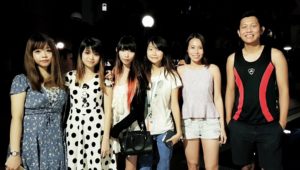 A team photo of Artemis

Below are the transcripts of the interview for some insights on the previous FSL Champions. We were curious how long they have been playing dota, and we were surprised to see some players with 10 years of dota experience!

How long have you been playing dota? What are your top 3 favourite heroes?

Bubbles: I picked up dota around 2015. I really like Luna, Spectra and Zeus

HaNaBiRa: Close to 10 years, inclusive of year gaps. For competitive dota, it is only a year. Pudge, Magnus and Axe

Apart from a scheduled practice timing, the team also comes online to practice if the players are available. They also play together if they happen to catch each other online as well, showing their dedication for winning.

How often did your team practice to prepare for tournaments such as FSL?

Everyone: We practiced 2-3 times a week and whenever everyone is free

We know that life gets in the way of things, especially gaming. For those who pursue competitive gaming, where more hours are needed to excel and improve, how do they keep the balance?

What keeps you motivated to train despite other commitments (EG. Work)?

Bubbles: The desire to constantly improve and be a better player, as well as the effort and hard work from my team mates kept me motivated

Hishiko: My goal to play in The International some day

jiaa: Being able to communicate and bond with my team mates as well as playing together to improve ourselves keeps me motivated despite the hectic schedule

kimchi: I’m dedicated, and the desire to win

HaNaBiRa: Training to be better

Going into FSL, which opposing team left a significant impact on you guys?

kimchi: Pacific Pink was owning everyone in the group stage, so we kept an eye on them. And EXOH, we lost a game to them because we were overconfident. Good lesson learnt.

After facing a setback against EXOH and finally emerging as Champions, we look at how the team feels after winning FSL 5.

Was the resolve to win even more tournaments stronger after emerging as Champions?

Bubbles: Definitely. The sense of achievement and pride after winning is a wonderful feeling and knowing our effort paid off made all our hard work and sacrifice worth it

jiaa: Yes, our aim is to be able to defeat male teams

kimchi: truly believe that the team has the potential to compete alongside and beat tier 2-3 male teams. after winning a female tournament, naturally the next step is to look to improving even more and aim higher

HaNaBiRa: Yes, because now I am playing in a different team

A year has passed since FSL 5, with only 2 of the members remaining to compete actively, new members have now joined the team and continue to take part in FSL 6 today. We ask the team where they are now and if dota still remains a large part of their lives.

Are you still playing dota actively?

Bubbles: I am overseas for about 6 months, so I am only semi-active and solo queue whenever I have time

jiaa: Yes, I enjoy playing the game and grinding my solo mmr

HaNaBiRa: Yes, because dota is part of my life already

Dota is known for its drastic patch notes, skill changes which completely tweaks the meta. Right now, it is completely different as it was a year ago!

How do you feel about the current meta and changes to heroes?

Bubbles: The current meta feels very team fight-oriented where players must be aware of when their heroes peak and use that to their advantage. Map control is also important as you could easily lose a winning game with just one bad fight

Hishiko: It’s hard for me as a midlaner because currently at mid there’s no “OP” heroes to spam. This patch is carry meta

kimchi: Game pace is much faster and more action

HaNaBiRa: It is a carry patch

For some dota is a past time, for others it’s their job and for the FSL 5 Champions, it led to some defining moments in their life, others not so.

Has dota and/or esports left a significant impact on your life choices? (EG. Career Options)

Bubbles: It has, if not for Dota I would not have met someone very important to me. Career-wise, I would not mind pursuing a job in Marketing or PR in esports if the opportunity came up

Hishiko: Not really, but I’m still looking for options to work as a full-time streamer/competitive player or venture into the gaming scene to organize events, when I’m older. Right now, I’m still very young and I’m still competitive enough to chase my dreams

kimchi: Yeah, met my best friend, close friends and boyfriend through dota. I am working for an esports company now. 2 of my sister game as well. More than 50% of my life is gaming

With only 2 of the members remaining to compete actively, we were curious what the FSL 5 Champions are doing now and in the foreseeable future.

Bubbles: IRL commitments take priority over Dota for me now, but the Asterisk members are all extremely capable and hard working so I’m sure they will continue to do well

jiaa: I see myself working towards > 7k mmr xD

kimchi: I see myself retiring and finally being able to stop competing. Seeing the team grow into something of their own and knowing that there will still be good female dota2 players in Singapore competing and aiming for more.

HaNaBiRa: Competing on a global scale with other female players.

Being female in a male-dominant game often raises some eyebrows. Although female esports and gaming personalities are much more recognized now, there are still some stereotypes that exists while some players do not really feel there should be a difference.

How do you feel about being a female esports player? Is anything significantly different?

Bubbles: I don’t feel like there is, or should be, a difference between male and female players. If there is a sport where male and female could be equals in term of capacity and performance, then it’s esports.

jiaa: I don’t feel different when I’m playing in high ranked games with better players. People tend to be surprised or doubtful when I’m using mic and I’ll gain plenty of attention just because I’m a female, which I feel it’s no big deal.

HaNaBiRa: You kinda get viewed differently by males, especially during in games, where they would say ‘GIRLLLL??’, as if they can’t believe a girl is playing on a same caliber as them. Some players would also accuse us of having our boyfriends to boost our accounts, which is not true. 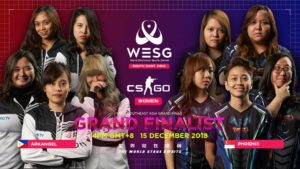 Female esports players, female esports leagues are gradually being recognizes and publicized around the world. With more structure and opportunities in place, the team has their own opinion and hopes for female esports.

What do you think can be done to encourage females to pick up competitively gaming?

Bubbles: I think an inclusive and welcoming competitive community would help promote competitive gaming in female players because Dota players are not always friendly to female players and if something is a source of bad experiences, there is often little desire to put in the effort required to reach competitive levels.

kimchi: A more encouraging and supportive community where females don’t feel like they’re being judged or taunted for trying to compete. It doesn’t help that females are not supporting each other. if we don’t even support one another, why would the general public or male gamers give us respect. Competing is not an easy task and I think a lot of girls are just not interested in it or give up halfway because they don’t feel like they’re getting any returns from the amount of hard work and time they must put in. I guess growing and building more legit female competitive gamers might help to spur on/inspire other females.

HaNaBiRa: I’m not quite sure, because I see many females competing nowadays.

Who are your idols or role models?

kimchi: Shizuma – She was the best female dota player in sea when I just started competing. I saw her play and many people were impressed with her gameplay, saying things like “she doesn’t play like a girl”. she motivated me to train hard and reach her level. kips – She’s smart and calm and proves that females have a place and value in competitive esports. She need not play but she’s a valuable asset to teams and players.

If you have enough time to juggle your commitments and responsibilities, what other games would you like to try playing competitively?

Hishiko: I’ve played HoN, Overwatch and CS:GO competitively previously. But if Dota 2’s is gone I would probably try to be a competitive Overwatch player. Maybe if PC games are outdated I would try playing competitive Mobile Legends: Bang Bang too.

Where do you see esports in the future given its rapid growth now? Do you think there is a place for esports in your home country?

Bubbles: I am glad that esports is receiving more exposure and being more recognized, but I think there is a long way to go before it becomes socially acceptable to play games professionally. There are many talented Singaporean players, but they are unable to develop their skills further due to mandatory military service etc.

HaNaBiRa: There is a rapid growth in eSports in Malaysia and Philippines, but not in Singapore, although there has been some form of substantial support. I don’t think there is a place for eSports in Singapore because everyone views it in a negative way.

Bubbles: I left the team because I had IRL responsibilities and subsequently lost interest in dota, so I decided to take a break for some time. I play Dota casually now because I have other commitments and play in NA instead of SEA

HaNaBiRa: There is a loss of rigor among teammates to train for upcoming tournaments. I am playing now for teams Fiery Souls for FSL #6 and Frost Fire for the upcoming LAN tournament Flight of the Valkyries.